Coronavirus: new wave of fake news around the world 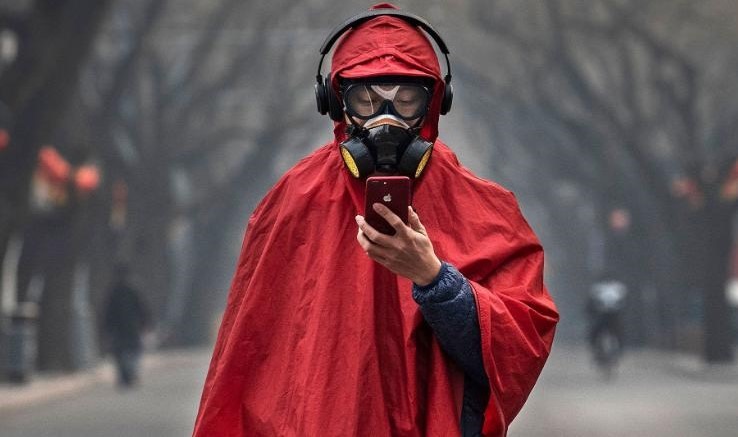 Misinformation about the coronavirus spreads faster than the virus. Unreliable and unverifiable information on the origin of the virus, the number of infected people and deaths, as well as on the magic treatment of the disease flooded the Internet. The fake mass media made Facebook take action to limit the spread of misinformation about coronavirus. It was mentioned in the company’s statement, that they are planning to apply the forensic algorithm, which will help to identify a false information and to limit it.

Coronavirus: new conspiracy against the world

Let’s start with the conspiracy theory. The biggest fake post was made by a user named Isaiah Rastetter. The latter wrote on January 22, that the coronavirus was patented and its vaccine already exposed. According to the user spreads through the media, so as to scare people and get them pay for the drugs. 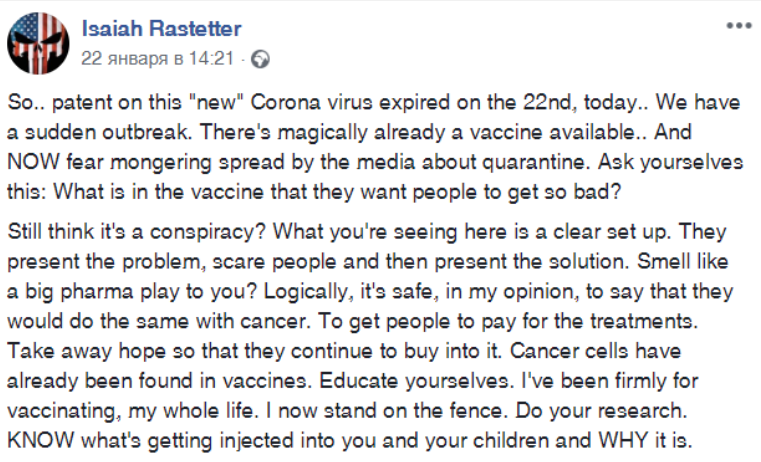 This information became widespread in both the media and social networks. There were other publications with the same context, which mocked and questioned the existence of coronavirus.

The claim, that the spread of the virus or the “legend about the virus” is done intentionally for the mass sale of drugs, is one of the conspiracy theories. It should be stated, that shortly after Isaiah Rastette’s post, the Chinese government announced about the transport infrastructures’ work suspension in Wuhan.

Quarantine was declared in the city: this means that you cannot leave Wuhan by public transport, entrance into the city is also restricted and departure of the airlines, trains and busses from the city was temporarily stopped. The steps taken speak of the fact, that the government did the utmost to prevent the spread of the virus.

What refers to the development of a vaccine, it should be stated, that the World Health Organization and many prominent specialists have talked a lot about taking steps for developing a vaccine and there has never been an official announcement about the vaccine already created.

There were also a lot of information in the Armenian Media that scientist have discovered a new vaccine against the coronavirus.

It seems, that there should have been few misinformation flows in China, were many of the mass social networks (Facebook, Twitter, Youtube and so on) are blocked, however, many of the myths were originally from that country. In the meantime, much of the false information came from the well-known Chinese teenager’s TikTok platform, where hundreds of videos have been posted with misleading messages. The hero of one of the videos stated that every 100 years the Chinese government spreads similar viruses to maintain control over society.

Another theory states, that the virus is a plot by former Microsoft CEO Bill Gates.

Videos about the origin of the coronavirus

On January 22, the first U.S. case of the coronavirus was registered. On the same day, a YouTuber named Jordan Sather mentioned in his Twitter post, that a patent for the coronavirus was filed in 2015. As a proof, he posted the Pirbright Institute’s patent. And as the American Bill and Melinda Gates Foundation has funded the fight against viruses for many years, many people found a link between the foundation and the Pirbright Institute, by taking the virus outbreak of Wuhan to the U.S.

Actually, there is no evidence to support this information.
The following document just shows, that a patent was filed in 2015 for developing laboratory version of coronavirus, the main purpose of which was only the treatment of respiratory infections and diseases.

2019-nCoV virus is a hybrid of snakes and bats viruses

There was an unprecedented view between January 22-23, that 2019-nCoV virus is a hybrid of snakes and bats viruses. The information also appeared in the Armenian press. Though the media didn’t disclose the information source. Only the terms, such as “according to the study of scientists” and “according to scientists” were used.

After the virus’s version of being a hybrid of snake and bat, the social networks were full of criticism of Chinese diet. On those days, a few years old video began to spread on the Internet, where a Chinese woman was tasting a boiled bat, saying that it tastes like chicken. People wrote, that despite the virus epidemic, people in Wuhan continued not to maintain a diet. 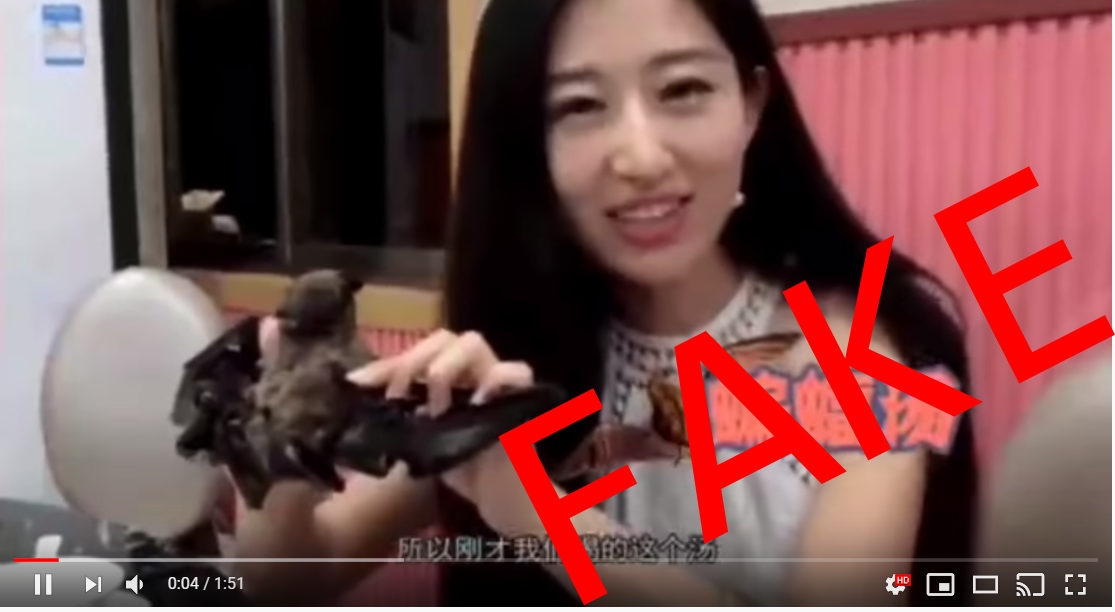 This video, however, was made not in Wuhan or elsewhere in China, but in Palau island-country in the Pacific Ocean in 2016. It should also be mentioned, that there are various versions of the causes of the virus, but none of them have been confirmed by either the World Health Organization or China.

No matter how fast the coronavirus spreads, the information on the numbers of deaths and infected people published in various media is often exaggerated several times.

For instance, the American Hal Turner Show wrote already on January 23, that 112,000 people died from the coronavirus in China, whereas according to the official data, the numbers didn’t exceed 30.

It should be noted, that you can learn about the spread and actual numbers of the virus by following the interactive map developed by the Johns Hopkins Center for Systems Science and Engineering (CSSE). Cooperating with a number of scientific centers, including the World Health Organization, the center collects and presents information on the carriers of the virus, death cases and recoveries. 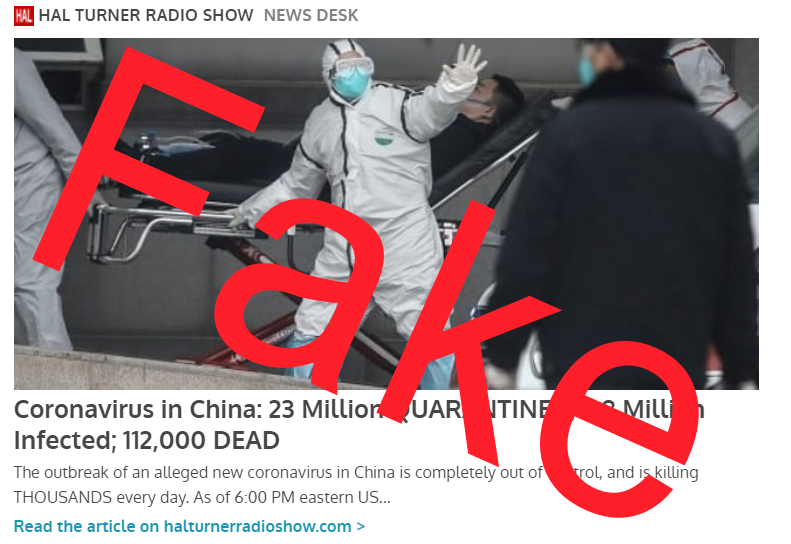 On January 24, a video about a new hospital being built in Wuhan spread on the Internet. The media wrote about the Chinese intention to complete the construction in a week. On January 27, Chinese Global Times and People's Daily wrote, that the hospital’s 1st building was completed in 16 hours. 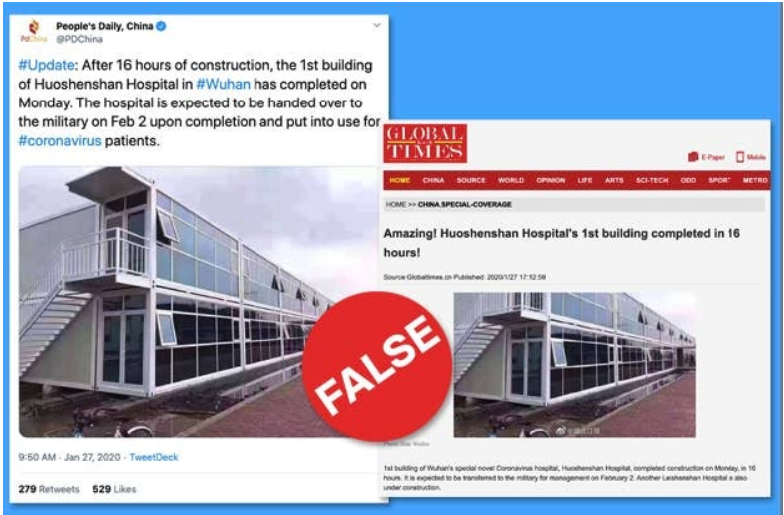 It’s already a month, the coronavirus misinformation is growing exponentially. It is not possible to sum up all the fake news spread these days in one article. The Information Checking Center is monitoring the developments on the topic and if required, will again refer to widespread frauds.